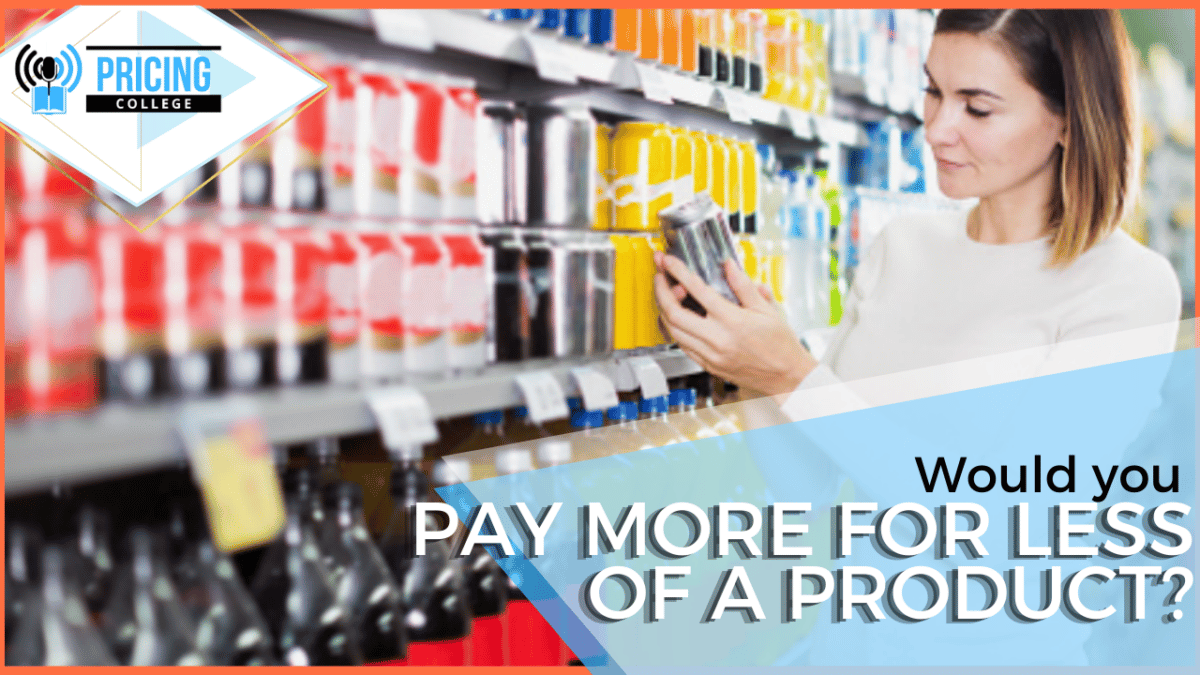 Would you Pay More for Less of a Product?🥤 Podcast Ep. 35

However – have you ever been in a supermarket and found that a 660 ml bottle of cola costs more than a 2 litre bottle – why could that be?

We discuss pack sizes and value based pricing – and what may be driving this seeming error.

[07:40] Promotional strategy must be clear

Are people willing to pay more for less of the product?

Okay. So, we’ve talked before about how products are actually getting smaller and yet the price is roughly the same, if not increasing for a smaller product. That’s shrinkflation.

So today, we’d like to focus more on whether people would pay more for a smaller product just because it’s smaller. And we’re just going to go into that using various examples of different sorts of FMCG products, drinks, snacks. Things like that.

At the front of the store, you get a can or a 660-millilitre bottle. And it might be in Australia around the $3.50 mark. It’s refrigerated also. So, that is a value add.

You walk away from there and you go down into the shelves with the fizzy drinks. You probably get a 1.25-litre bottle. And it may be on promotion around $1.80 or $2.50.

Does convenience make people pay more for less of a product?

So, what’s going on there?

I mean, it’s sort of different variations on the theme of convenience. You’ve got the smaller drinks in the fridge that are being chilled. Because people like that, right at the counter. They’re easy to take.

It could be the people that walk in just want to drink and they just want to walk out there.  Possibly, the assumption here is that they could be willing to pay more for that can.

But then, you’ve also got the slightly bigger bottles of drink in the fridge, slightly more. Though, not always they are more expensive than the small tin cans.

Because those tin cans have got smaller and bottles are actually in some way bigger. And you often get that buy one, get an extra one free offer going on with those bottles of water and Coca Cola. Things like that.

From what Aiden was saying, you walk back one or two aisles to the major aisle. The food and drinks aisle. And you can just see how the price points are…like everywhere.

I don’t know if they are logical. Or whether they’ve thought it through.

I think there is a sense of segmentation going on here.

And clearly, the sort of people I think, consumption of large 2-litre or 3-litre bottles of fizzy drinks is decreasing and for a number of reasons.

So, I think those things are decreasing. People are probably segmenting into certain groups where you just want a little snack, an impulse purchase near the counter.

You’ll buy a small kind of drink because you don’t feel bad about yourself. But you may feel bad if you buy a bigger one. I can see the segmentation of the larger bottles, potentially. Even though it’s the same product and the same material in those bottles are being offered to a very different market.

At the end of the day, there’s not much point in buying a 3-litre bottle of Coke. If you’re only going to drink a litre of it or in that week, the rest will probably go flat or be leftover.

So, you’re segmenting potentially by family structures or household structures, where the person is.

Are they walking home shopping and they don’t want to carry a big bottle?

There’s a lot of those factors that go into it. Whether or not the shops thought about them all. That’s a different question.

How FMCG can help supermarkets build a strategy for people to pay more for less of the product?

Yeah, I suppose that’s a question for the suppliers. FMCG as well informs the supermarkets about how the end consumer and shopper consumed these types of products.

They’re the ones that should be doing that sort of research and informing the supermarket. So they can, in turn, present a clearer strategy pricing to the end consumer.

But from an end-consumer perspective, it can be confusing – these price points I mean. For instance, usage. We know we would buy a bigger bottle of Coke or Pepsi if we were having a kid’s party. Then it makes sense to buy bulk.

But a confusing promotion I saw recently was between Pepsi and Coca Cola bottles. It just seems the promotions oscillate between the two.

If one’s being promoted, the other one’s not. Coke was promoted. And then Pepsi was cheaper. It just seems to be that there’s no sort of strategy other than it’s all about trade spend.

If one’s pumping money into trade spend and the retailer will promote that one. Then put the other one back on full price hoping that people will grab the promoted goods.

I mean that in turn, it just destroys any sort of value base or consumer-led strategy. Because they’re just going on an impulse buy based on price.

Whether the price is recouping the money from that promotion or looking at the data, stats, and even people grabbing the items. I would say people still prefer to go for the one that they like. It could be in the taste. Or it could be because they trust it. I don’t know. What do you think?

9 out of 10 Cats prefer a Pepsi Cola. Apparently, our first taste, that was a famous example. Not cats but human beings. Because it was more sugary.

How does portion control encourage people to pay more for less of the product?

Something on the first sip. But, yeah. We’ll cover that in our other podcast on fizzy drinks.

So, what I would like to point out is, I think there’s a lot of value that can be added in pack sizes. Certainly, people on diets have portion control. I think it’s the term used in the diet industry.

Knowing the size of the portion. And the smaller account is a fizzy drink. That “treats size” or “fun size” which it used to be called. It really makes people feel better about themselves.

They’re buying that smaller can. They’re probably prepared to pay more because of the ancillary benefits to their self-esteem and their mental approach to life.

So, I think I can understand. And to some extent, smaller package sizes…that will be chocolate bars, fizzy drinks, and those sorts of things. As long as they give the calorie intake or the kilojoule intake, people will pay more for that.

Promotional Strategy must be clear if you want people to pay more for less of the product.

What I’d like to clarify here is that I think that they would pay more than that. But that you need to have your promotional strategy clear as well. It can’t confuse that strategy if you’re going through a pricing strategy based on usage.

How do people consume?

How do people go through the supermarket and what do they grab?

You need to get your promotional strategy in line with that strategy.

One point to add in and this is something I had thought about. One industry where it’s bad for your health. And it’s got high sugar content, is the wine industry.

If you go into any ball shop or off-license, you will see that it’s pretty much the same bottle of wine size, covering 95% throughout the shop. Which is, I think it’s like 750 millilitres is the global standard.

You do get a larger bottle more. I think magnums and special promotional things. And you can sometimes get smaller ones. But I would say 90% of the bottles sold are the standard bottle.

You look at the size of coke cans, the size of those bottles. Wine to my mind would be perfectly applicable to that if a person lives alone.

They say I’ll just have one bottle of wine or one glass of wine for dinner. Then, you don’t have that temptation with the second one. So, it’s in your calorie portion control.

It takes a decision out of your hands. And this would even be more beneficial to people. Because obviously, as we all know about wine. There’s a slippery slope if you have one. And then the second one becomes more appealing.

So, yeah. That’s out there to the wine merchant to the world to give me an answer.

I think the same goes with chocolate. There are some real chocoholics out there. I questioned whether reducing the size of the chocolate bar tends to only happen with value packs.

When you look at chocolate bars, say at the counter, they’re still the same size.

So, in relation to the argument about reducing pack size purely for our health, I debate that. Because the ones that are in counters are still the same size. Single purchase ones are the same size and it’s generally the value packs.

So the value packs, who are they aimed for?

Kids like eating more from what I’ve seen. They do eat more and obesity levels are rising. So, I think the value pack is very similar to a selection box of chocolates.

People are just eating more of them because they’re smaller. It’s almost reverse psychology that “because I know it’s smaller, I’m going to eat three times as much,” because that equals one normal chocolate bar. So, I think it’s increasing the consumption of sugar.

One final point I’ll make is that this is a very modern problem. If you think back to what sweet shops, lolly shops, and your local grocery store were 50, 60 and 70 years ago. It was somebody with a white coat, pulling things, and weighing them on a weighing scale. And giving you the exact weight that you wanted.

In theory, pack size is a modern issue created by modern supply chains and supermarkets. 50 years ago, you’d say I want X amount of these sweets or these lollies. And it was you who would get into the exact amount.

It’s funny how things go in circles. And though we’re probably moving back to some extent to that old deli-style approach. And also, if we’re noticing, even if it’s on a latent subconscious level, that things are getting smaller.

What does that do to people?

It breeds scarcity. It breeds a sense of loss.

All the while, the price point is the same for something that is shrinking, if not getting more expensive. And people are consuming more.

So, they’re consuming more. There’s a higher volume of that consumption and the price points are going up.

Overall, just based on that sense of loss, not having it. That could also be triggering the rising obesity levels as well. The Difference Between Pricing and Revenue Management 💹 Podcast Ep. 7 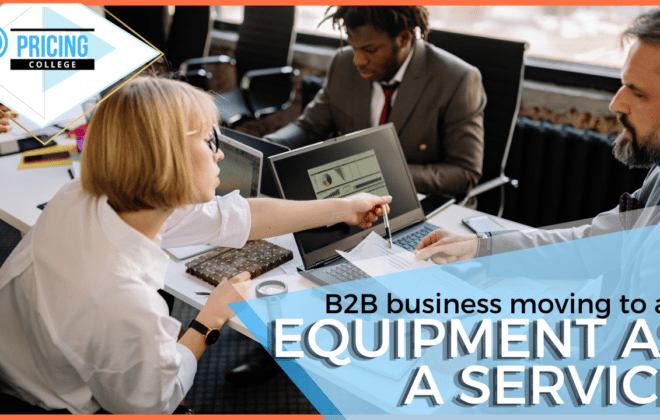 B2B Business Moving to an Equipment as a Service 📋 Podcast Ep. 93 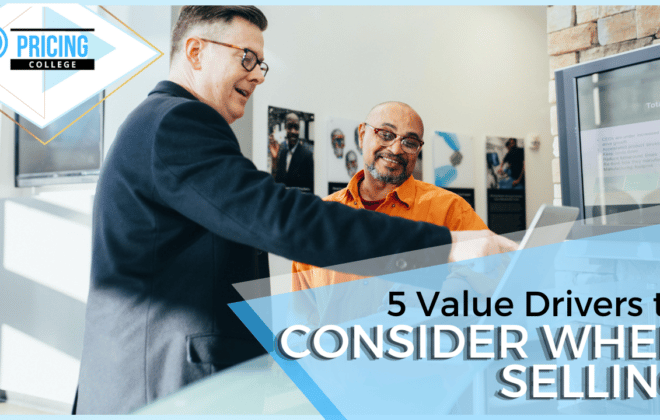